Yes, 10th october was the date to save…Ironman Hawaii!

Sam , Hans and Raphael qualified for this A-race, Raphael said no to his slot and choose for the IM70.3 world champs in Zell. As a young athlete we are sure Hawaii comes back for him.

Sam qualified by overall AG winning in South Africa and Mount-Tremblant, Hans did this in the European Champs in Frankfurt!

Both had a marvellous season behind them and were ready to go into this race!

All went well, when we saw from the beginning of the bike course both were moving up very quickly. They were close to each other at the beginning (within  1′ is  close in such a race).

But very soon it was clear that Sam was doing very good on the bike, he realised bikesplits that were very fast. In the third section he rode faster than Frodeno, Kienle and all other competitors. At that point he was going very hard. Was it too hard? Maybe.  Sam was out there  for being the  best I and not for an average performance. That was his goal, that was where he went for!

After exactly 100K on the bike we notice a sudden change in graphs for Sam. Which didn’t happen in any 2015 races before.

Very soon we had the feeling Hans was  having a very good day as well. He wasn’t losing a lot of time on the pro riders, even winning on pro-group 3. At Hawi he showed up very fast and it was clear he  was pacing perfectly. Being there in  such an environment gave him the wings he needed for this race! Hans never had podium ambitions, but what he did have was the ambition of  being as good as possible!

Hans his power – HR – Cadence file is steady. He begun a bit harder than expected. But needed to ride away from the pelotons. Where ‘legal’draft is a real disease.

All was going well till Sam suddenly, after 100K  got hit by a hammer. We noticed several things out of his files and for sure this wasn’t what we expected to happen. These things we could put together. 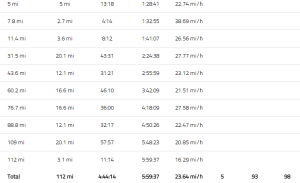 Sam took off very hard,
maybe slightly too hard, maybe something was blocked in  the back. The powermeter was showing a beginning between 10 and 45milesof 296NP 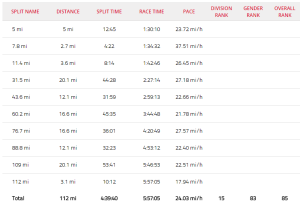 These splits turned out in a 269NP for Hans, coming from halfway the field this was just a great effort to start running in the top 100. It should be good for the 4th overall AG bikesplit.

So where we expected Hans and Sam coming off the bike …suddenly only Hans turned up. And it lasted for minutes before Sam showed up. First thoughts were going to a bikecrash. Fortunately this didn’t happen.

269NP without aero helmet ;-), or after all … the legs push the body…Hans crushing it on the bike!

Sam never showed up as fast in Hawi before, but the end of the bike was a torture. After 100K it snapped somewhere.

Hans  came off the bike with a super-output and feeling, he started the marathon at 4’23/km which was too fast for him. But we forgive him, he was enjoying his race and running between fast runners in a races simply pushes you also! After 10K he wisely reduced tempo a bit to run to the finishline without any problems! Hans set a great performance of which we are very proud. He made a long way past years becoming a toptriathlete and I will never forget where he came from as being a cyclist. Past year he won his first duatlon, his first half triathlon, became european Champ duatlon and now he was out there…racing in  Kona! A dream coming true, living it together with his biggest supporter  Carine (who took most of the  photos in this blog). In tritraining it is very important to have a good periodisation, Hans was on the spot…from april till october. Call  him a Flandrien!

Hans running down to the finishline and crossing the line with a big smile! Thumbs up!

For Sam the beginning of the  run was just struggling with his cramps, and that’s not good for the mind of course…Despite that he was still in the game for getting his AG podium or even  a win, but cramps ruined this. He started the marathon in pain and walked by the residence where he stayed, thinking about getting a shower.

This wasn’t the run we expected, Sam was in pain but after 10K of walking he got in a 4’38/km pace again with walks to not get into cramps.

This is the way Sam normally runs. This HRprofile we see again after 10K on the run. Of course with the cramps and walk on a bit slower pace.

Evaluating Hans his run we see he took off a bit too hard, but still this is a very normal graph for Ironmanracing. Most athletes will have this kind of graph. Try to be very regular and not burn yourself too soon!

And after 10K of walking and not getting in his pace he took off again.Whole race long cramps where there and that for already a very long time! Supporters and other athletes who respect him for the athlete he is motivated him. At that point it was about having the real Ironmanspirit, or not.

Sam in pain, but not giving up!

After 10K his run got better and he took back lot’s of people! The last 30K he ran an avg of 4’38/km without getting pushed. For him this wasn’t about performance anymore, but about chasing the finishline. Running 4’38/km in cramps and walking by the aid stations means energywise there was no problem. What the problem was and why he got in to cramps we are looking for. We have some ideas and for sure it will have been a chain of a few things.

The positive point is that Sam took back lots of crashing people, and showed up at the finishline just after Hans coming in.

No words needed I guess..

Later that day I heard a very happy athlete and an athlete with some disappointment.

Ironman Hawaii was done, nothing could be changed about the result. But it was legendary again with a strong Frodeno and too many crashing Belgians!

Both athletes get rest now for a few weeks, but you may know that 1 of them already is very keen on his next Ironman.

At the same day Stefanie was racing in Empuriabrava (Half Triathlon), Stefanie is doing great races this period and once again hammer was on the block for her!

Stefanie pushes 232watts NP on this bike course! Which was good for the best female bikesplit!

In Empuria Stefanie did a good swim and took  victory by coming off the bike very strong. The 232NP she pushed is  hard in female racing! It gave her some time ahead of the 2nd and 3rd woman. On the run she could run steady at 4’27/km for the first 15K. But at that point she was sure of winning the race and slowed down (because it got tough) to a 4’35/km.

For Stefanie season is almost done, and it’s clear…she was hungry at the end of this season. 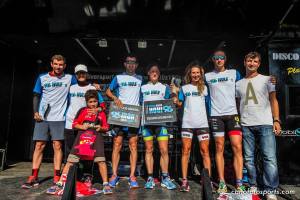 2nd consecutive podium for Stefanie in Empuria. She may be proud putting 2 Half distances on her resume!

We have won together past weekend and we have not won together. But anyway we will win again!

A proud coach about the way our athletes acted in their races and dealed with situations!