16th of August once again we had someone with ambitions racing in an Ironman with a decent pro field of which we pointed out Jordan Rapp (USA) and Paul Ambrose (AUS) were the top of the field.  Ambrose won the 2015 Ironman Australia and Rapp is a multiple Ironman winner….

Sam’s ambition was clearly to win his agegroup, enjoy the race and do a good nutritional and racing test with Hawaii coming in 2 months. First things first, in the last months of preparation we must say everything went well in his sessions. Figures were good, no injuries and a good health. Which of course means a lot in preparation of a big race. It was clearly he was capable to do a good race.

Athletes never train the same amount or intensity all year long. Recovery is an important issue when it comes to periodisation. Never forget that if you want to approach your goals. Get the balance!

Swimming and Sam, don’t tell me that doesn’t work for the 100th time. His swim was  were we liked it to be, within the limits of being in the game.

What if he could swim faster? That question has been asked to me for at least 20times the past 48hours. How many times he must have heard that? How I answered it in my opinion…

1) If  you swim a 1h04 Ironmanswim, you DO can swim, and if it’s not your best discipline so be it. Live with it, act with it and try to focus on the positive things in it. Sam is now training every week 1 of xx sessions on getting a different, more efficient stroke and  power has an other input…

Sam is now focusing once per week on improving his stroke and getting more efficient, power and endurance in other sessions. Let’s see, I believe he can swim a 1h00-1h02. But if he does, it must be done as economic as he swims now…if not, I rather see him swimming a 1h05.

2)The swim is only 1/9 of an Ironmanrace, you better lose  5’/h there than on the bike or run… US pro athlete Jim Lubinski prooves that being steady over 3disciplines can bring you to a good performance on prolevel, just saying… successfull and fast triathlon is still a combination of all three disciplines.

3) I will tell you in person if you ask. Sometimes I can be a bit ‘direct’

It’s not because a discipline is not your ‘top’discipline that it’s not a good discipline. You can not get in top10 of an Ironman if you are not at least reasonable good in all disciplines. Look, this is how we approached the last block of 3 months towards Canada.

On the bike Sam had to get in the rhythm after some wetsuitwrestling (he won the fight, and it would not be his last one that day), but once he was in the rhythm the hilly track was really his cup of tea. Sam is someone who thinks about his bike, his gear and also keeps on improving and tinkering around with it. He astonished me last time, when he showed me the hole he cut into his frame for an internal hydration system. It has its purpose, but you must dare to do it. On the bike Sam really flew and despite the more easy beginning he established a strong 290NP. For the cyclists among you, you can compare this to an average poweroutput of an average (pro)continental cycling race over the same distance. (data from our own cyclists elite/pro, proven over different races  – difference in weight 2-5kg) Of course there is a big difference in power and heartrate and the length of these.  But all of that, is another topic.

The quality of the bike course was very high – how did Sam approach the race HR wise, flat! With a good nutrition plan and of course a correctly trained body it’s possible to stay steady.

Sam came off of the bike with a good feeling and directly took the pace that was planned to race on. A fast move out of T2… and see what happens. A marathon after the bike is unpredictable, but there must be a plan, and offcourse we advise you to have a plan B also if you would try this. Looking in to his data we see following things. 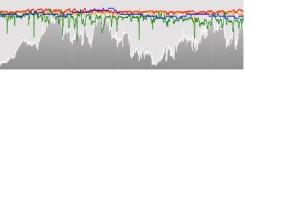 After a fast start on the run, the drop was not that big towards the end. An athlete who was capable of running steady till the end on hilly run course.

Sam had a 4’18/km after 37K, at the end of the race he averaged 4’25/km on the full 42,1km. He focussed on the first AGplace, he was sure of winning at that point and it made him run more comfortable. In Hawaii for sure he will be pushed by many other very strong  AG athletes, who will try to win the AG race! Let’s hope Sam can be amongst those warriors. 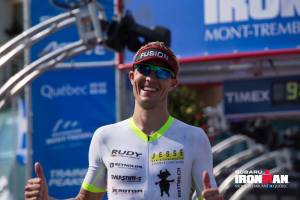 Thumbs up for this performance! 8th and AGwin for a passionated athlete!

And now…realising a big performance always comes with questions…will he be in shape for Hawai, will he be recovered? I believe he will, health and accidents can always happen. But if he reaches the swimstart in Hawai in this shape, he will perform well!

Hammer on the block for Sam, congratulations…earned every day, every week of the year!