Ironman Cozumel was the race for Brooke to top off a magnificent season!

Our Canadian Pro Triathlete really prooved she’s a top pro this year, with wins in IronMédoc (France), Ironvittoria (Spain), Half Irons Deauville (France), Oceanlava Lanzarote (Spain), 3rd in Challenge Ixtapa (Mexico), her last race  would be Ironman Cozumel, a place she really likes to be at. So motivation was up high!

Brooke suffered in Cozumel last year and she was keen on doing a performance! Easy said of course, most people know preparing a race is a physical and mental game, as a 3rd full distance not so easy to approach. We had the chance to work on the super base condition she builded up this season, that’s why I knew she would be ready without touching her ‘freshness’.

2days before the race we discussed how to  approach the race, we put a 58’swim as target. And were very conscious already there  were some very fast female swimmers in Cozumel (sub 50 swimmers). So it would be possible we would have to chase during the race! For the bike, we had a non-reliable powermeter, so biking would be on feeling and never blow up! Because of the heat we had to be ready to do a good run  and come back  on athletes starting too hard! Pace set was 4’35-4’40, taking count with the heat and humid environment that was a good pace to be at. (Later we see, only the top 3 ran slightly harder)

On raceday Brooke did a 56′ swim, which is very good for her, in front a group of 6Pro  women who swam a 47′! So right and realistic view before the race of Brooke, on the bike she was alone to move up.And so she did, moving up from 16th after the swim to 10th at the start of the run. Of 1 thing the coach was  very sure, she would NOT collapse on the run if she paced well. After 7K I saw her pace and knew she would move up! Only, after the bike on this very windy race course the gaps were made very big and it was difficult to come back on this pro level with lots of strong ladies…who also didn’t collapse.As an athlete you must consider racing against other strong athletes as an honour.  Brooke ran her run  and once she was in 9th position she had a good view on the race and saw it was impossible to move  up to 8th. With a fine 3h21 marathon she finished her last race of 2015!

A happy coach, seeing her race consistent, now focus towards a splendid 2016 after some nice resting.

In Almere Brooke could have won the race, but it ended up frozen in a warm bath…in Lanzarote, Ixtapa and Cozumel Brooke took vengeance in style!

What a weekend, last weekend Ironman Frankfurt was on the schedule for some of our athletes, in numbers 6 of them! Arriving in Frankfurt was a bit of a bummer, once you got out of the car the hotness kicked you down…On raceday 39,5degrees and hottest day EVER in Frankfurt. Most of the cycling and running course were in full sunshine…our athletes shaked by the idea of 9-12hours racing in this weather. But motivation was there, and no way back…so raceday was on!

The swimming course was a very nice track, 2circles to do and in between an australian exit!

Because of a water temperature of 26,4degrees there was no wetsuit allowed,  but on the swim no surprises for our athletes. Everybody got out in a nice time and could leave T1 with a good feeling!

Fortunately  the race started early and the first 2hours of the bike course temperatures were OK, after it…it became hot. Lots of roads where brandnew and the sun made temperatures on it above 50degrees.  It was clear our athletes were riding hard in the race and very soon Hans (Bel) and David (Esp/Ger) appeared behind the pro athletes where Jan Frodeno (Ger) was hammering the field

.Really an amazing race to follow and seeing this former Olympic Champion winning his first Ironman!

A bit later Peter, Nesten, Sem and PJ were riding on the heartbreak hill, they all seemed ok at that point! Frankfurt became warmer and at noon temperature reached 39,5degrees in the shadow. Sufferfest would begin now! While we were waiting the athletes on the run  course, Hans was the first I saw coming. There he was, perfectly in the game…for a cherry on the cake, Hawai! Some quick words of which I knew he would be able to go steady. He was suffering, but ok. A few minutes before I had seen Pro athletes looking like ghosts on the run. He wasn’t! He stayed steady till the end, a bit of drop in the pace was ok. But even on the run he kept on eating pro-meat. As 30th (pro athletes included) , 2nd Belgian behind Frederik Van Lierde on this European Championship and 5th in his AG he crossed the finishline. This really is the output of a big input, congratulations!

Hans crossing the finishline, he knew he was in for Hawai! Happy and well deserved! West-Vlaanderen has a top Ironman agegroup racer!

David came by 10’later,also on schedule for a slot to Hawai, but he looked white and had deep eyes. I have seen David a lot on trainingrides, on which he picked me up and dropped me off again. This wasn’t the David I saw then, the eyes were fading away and I thought he would have to quit the race. He had very hot and his body didn’t react anymore like we wanted. But he broke through this difficulties and finished with a smile in still a decent 10h21. And he should, finishing an Ironman deserves the deepest respect, also if it’s an hour later than where we aimed to. A good recovery followed by a toprace will be the best cure for him!

Peter looked good all the way! And did a very consistent race!

Starting in wave2 our other athletes came by a bit later, and yet at the beginning of the run we saw Peter was into the game. He came a bit earlier even than expected. Just a few minutes behind him a well racing Nesten could begin his first runninglap of 10K followed by PJ and Sem! Everybody was on the run course now and aiming for the finishline!

They did and realised a dream! And above all they became athletes…the difference between doing a sport and being athlete I’ve explained them already…and they got it very well!

These 3guys became an Ironman last weekend! Sem, PJ and Nesten smiling after the race!

Ironmanracing has maybe one problem coming up, If you ask me what’s the level of agegroupracing? Well, that’s very simple. It’s more difficult to get into the top 15 of the agegroupfield, then getting a top 15 in the profield.

I love the motivation of our athletes, they live the sport with a no-nonsense mentality…it keeps us going for performing high! As a coach I got goosebumps when my athletes crossed the finishline, they rocked Frankfurt! 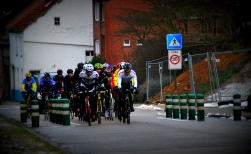 Our athletes working on one of the winter-groupsessions, train well in winter or you’ll be in shape too early or too late 😉 Train smart, perform better!And you’ll be good 365days a year 😉

An exciting day it was…. 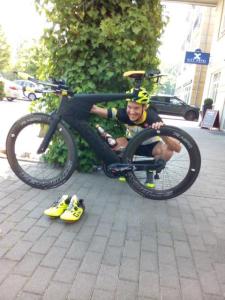 Was Sam Gydé hiding himself in Frankfurt? I don’t think so, working hard in perfect Hawai-weather!

On the same day of Frankfurt we had the most beautifull race of northern France having place. In Gravelines Chtriman 113 took place as the French National Long Distance  Championships, with 3000m swim – 90k Bike and 21K run it is also the perfect prep race for athletes willing to step up to the full distance! There also our athletes performed like a boss and they may dream one day of becoming an Ironman!

Sébastien was racing hard in Chtriman and put down his best ever race, despite some technical problems on the bike!

Next week another big race is coming up, Ironvitoria-Gasteiz in Spain, where Brooke will try to aim as high as possible!