What a great day last sunday, Raphael once again seemed to be the best Belgian age-group athlete and got qualified for the World Championships Ironman70.3 at Zell Am See!

But…what lots of people didn’t know…there were  also 2 Ironman Hawai slots to take…Raphael got listed 6th, but before him in his  agegroup one of his concurrents already qualified. So he got 5th on the rolldown…and got the chance!

But no he said, focus is on IM70.3 World Championships and not (yet) on Hawai…and right he is…because we are sure that in the right race at the right time he will be able to take his Kona-slot in a full distance!

Raphael got by his performance and the rolldown the chance to go to Kona…he said no…because one day he’ll get there by getting qualified in a full!

Past weekend was definitely one of those grand slam weekends! With 3 Half Ironmandistances we had 3 major goals coming! Saturday Brooke realised her double after doing a great race again in Deauville (France) She took the win by coming out of the water 2nd and having to wait till the end of the run to be sure of her 2nd consecutive win! Click here to hear interview with Triathlete Magazine!

In Troyes (France), approx. 500km further we had Sam and Hans racing in this nice field of athletes! Both of them did a fine race and ended up 10th and 11th scratch within 10’of 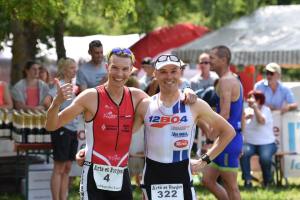 Hans and Sam after the race, happy about racing in a great setting!

winner Damien Fauvre – Felix. With 2700m of swimming they choose a race to make it for both some more difficult to come back…you have to find your challenges 🙂 For Hans, this  race was once again hammer on the block in a superseason, while Sam loves this race because it’s organised by his Team and is keen on performing for them and so he did by getting in that top10!

The making off a macrocycle 365days in advance, is the success of a good season! Being in shape too early or too late is such a pity of each effort for athletes!

In Ironman70.3 Kraichgau (Germany) Raphael maybe surprised the most! Only some nerves the days before could keep him away from his ticket to the world championships! But he was strong and took his ticket to Zell Am See, World Championships Ironman70.3!

A well built load during the year with a wise tapering off lead to qualification for Raphael!

His performance was not only good enough for the ticket, but he also became first Belgian age group athlete! Raphael his season so far is very successfull! With his 4th place in the Half Ironmandistance race of Choisy Au Bac he prooved to be consistent! 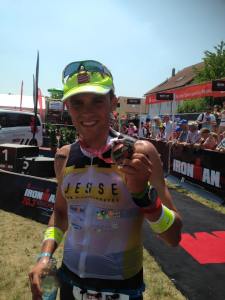 If you work hard, you can play hard. If you played hard, you MUST smile hard!