25th of october was a big day for Raphael,

he tried to go into wintertime very relaxed, by aiming for his slot to the world champs IM70.3 2016 in Australia already!

At the end of a very long season for Raphael, with qualification for IM World Champs 70.3 in Austria,  a 4th place in the Half Iron of Compiègne and some very nice podiums and top 10’s in Short Distance triathlons, Raphael had already a very loaded season. The idea of going to Turkey was simple, getting that slot and have a  relaxed spring in 2016.

Raphael was in shape, 2weeks of no running because of a strain injury after Ieper(1/4triathlon) was not holding him back. No, instead of that we worked on ‘crossfitness’ and builded shape towards IM Turkey.

The swim was good, Raph turned up 8th in his AG and was in  the game for those 2 slots. Yes, 2 slots…that’s not many! After 45K on the  bike we noticed on livetracker that he  was going hard, and was already close to the first AGplace. It may be said, Raphael has become a much more steady biker, and in less densified half Ironmanraces you NEED to be. You can even take advantage of it!

Working well leads you not only to 1 good race, it leads to a full season of racing on a high level.

After the bike Raph got into T1 as 1st in his AG! On  the run his concurrent for 1st place simply was too strong, he ran 1h18, which not many pro athletes did. Raphael finished 25th overall and 2nd in his Agegroup after a good run.

Raphael running in Turkey, chasing his ticket! He realised and got back from Turkey with a big smile.

A few hours he was in doubt if  it would have been enough for the ticket for Australia, but very soon we knew he cleared the job! So, in for the World Champs 2016 already and getting into wintertime…relaxed! 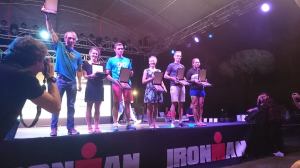 Raphael on the Ironmanpodium, every triathlete wants to get there!