Gravelines (France), a town just across the border that breaths triathlon as soon as you get there. For me it looks like every inhabitant actually is a triathlete…but that’s probably because the people I know there…are 😉

The A-race of the day is the Full distance race (Ironman distance), 2years ago Hans Vandenbuverie could win this beautifull race and that meant a mental step up resulting in a physical step forward also! Today it was Tony who was our man in the front, qualified already for Kona ’18 during his first IM in Wales, in search of experience on the full distance. A perfect preparation was key. The last few weeks before the race are always exciting but no little injuries, fatigue ok and more than race ready. 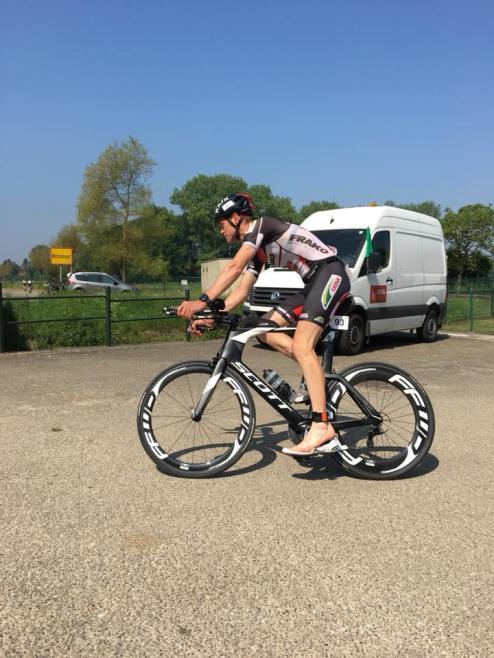 Tony  moving up on the bike and leaving T2 1st!

With this preparation and  knowing your athlete we knew that in an honest man to man battle he would play his role! No athlete is born at his strongest, but he grows strong.
After a good swim (1h01′) for this duathlete turned into triathlete he managed to move up so strongly on the bike to finally put his bike 1st in the racks. But with some guys following closely behind.

Tony only focussed on his own race in France and averaging 240NP and a very moderate HR for 71kg he could put down his bike in T2 fast and ‘fresh’ despite the heatwave!

For Tony we agreed on a 4’20 to 4’30 run. Ambitious but a pace Tony has in his legs.
With only 20″ advantage for miles far in the race it’s passed halfway that the later winner would take him back! Tony kept going well and found there were not enough drinks on the racecourse for this heat. ‘Each time I drunk, I wanted to drink again 1km further…’ but no worries, when you pace well and shape is good a crash doesn’t happen. Tony kept going and finishes only 1’30 behind the winner in 9h11′ putting down a 3h08′ marathon. 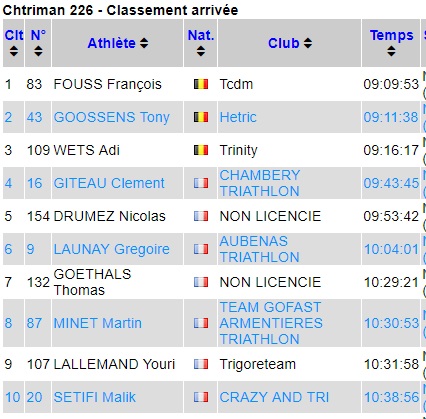 Gravelines also has its 70.3 triathlon and LD duathlon (10-90-10). For our duathletes this certainly is a main goal … as there aren’t any similar events in Belgium/Netherlands.
Our 2 AG vice world champions Jan and Wim went into the race with other goals. For Wim,winning the AG Belgian and European title and in top shape, a race to aim high. For Jan, a race to re-enter racing after serious bacterial infections. And as the body gets healthier the races approach.
Wim is doing a ‘grand cru’ season and after his good spring results today he puts all other athletes strongly behind him to win the race and immediately also win his first overall Long distance. As I remember well, only 4 Belgian athletes won a Long distance duathlon the past 2 years (Odeyn-Pro, and our agegroupers Jan, Hans and now Wim).

Wim heading towards the win in this tough French Duathlon!

In the 70.3 race it was Bert who took off with a hard swim, unleashing his legs on the bike and cutting down the group! 2 extra kilograms after Ironman Lanzarote didn’t stop him from doing another amazing performance to run towards 2nd place! And we would forget, but also winning the masters race (+40yo)!

Not so far behind our other athletes in the top 20 crossed the finishline with Dimi on 17th and Séb on 20th position! Remarkable performance of Séb, after finishing Ironman Nice only 7days ago!

Dimi finishing 17th and racing very strong in approach of his first Ironman!