Past weekend was thé kick off of 2018 racing in cycling and duathlon!
With the first cyclingraces this weekend for elite, amateur and masters in Vollezele, Pommeroeul and Callenelles the agenda was quite loaded. But there was also cyclocross, with 2 races to go for our riders it’s still exciting! Kevin took part of the race in Scherpenheuvel and how…!

In Jurbise, Hofstade and Westende our athletes raced their first duathlons of the season!

A winter lasts for a long time if you are keen on racing, but it’s also a period to enjoy. To turn back to basics and focus on what’s really important to race hard and focussed during the season. A mental setback, physical preparation, testing new gear, planning your macrocycle and looking forward to it!

For our cyclists, who in contrast to our triathletes, don’t have any prepraces worked smart and efficient past winter. They took their time to put in impulses of all matters, they slowly builded up well structured and past pre-season testing showed us that shape was there. Ready for racing, ready to battle with the other competitive cyclists!
Our U23 riders, Dries and Robbe, both took part in Vollezele ( Elite/u23 – hilly race).
For Robbe, his first race as U23…for Dries his first race after 1 year without competition because of a knee he injured hardly bumping into his steering. Untill today he is still getting physio to remobilize and strengthen this knee. But both worked hard and showed what they are capable of, in this field Dries immediately went into the breakaway and so he stayed there untill the finishline! 16th in the  end and Robbe finishing in the first part of the peloton a bit further. 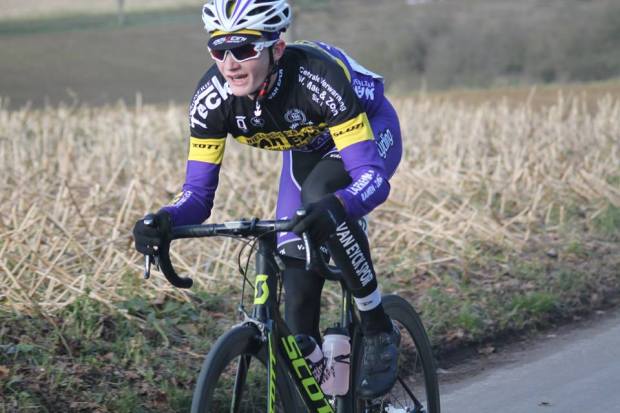 U23 rider Dries in his first comeback race, ready and powerfull 16th today!

Svenne and Guillaume, both licensed in wallonia, took part of the Open Elite/U23/Amateur/masters club championships in Pommeroeul. It was Guillaume (who grew to a winner last year) who launched the breakaways and he also went far, Svenne from his side made it in this pack also and so they were both in front of the race!
In the end it was Guillaume finishing 2nd in his first race of the season and Svenne, a bit further in this pack, who finished also 2nd in the masters race!
For Svenne, who broke 6vertebrae in June and having to retake slowly and painfull(!) this was not only a physical performance.

*Past tuesday Svenne came for pre season testing, watts were good and lactate profile seemed 95% ok, but there’s still some must-do in it. He got 1 message of me that day: “You go with the first breakaway, race like you always did and if you run empty that’s like it…but don’t look back!’ He did, he is back! 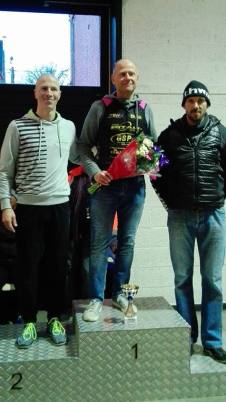 Svenne back into racing after breaking his back, 2nd!

In the same region Anthony raced an open race and also found himself in the right breakaway with his fellow elite athletes! 80K later he finished 7th in this leading group.  During his splendid 2017 season it’s clear that Anthony made a physical step and is ready for upcoming races!

In cyclocross not many races are left, but it’s for the ones who continue hard that nice results happen! So was for Kevin, an important and good season for him in which he remade the step forward and was glad to be able to fight for podium in most races…but today it was not only for podium, his perseverance was rewarded with the win in Scherpenheuvel! 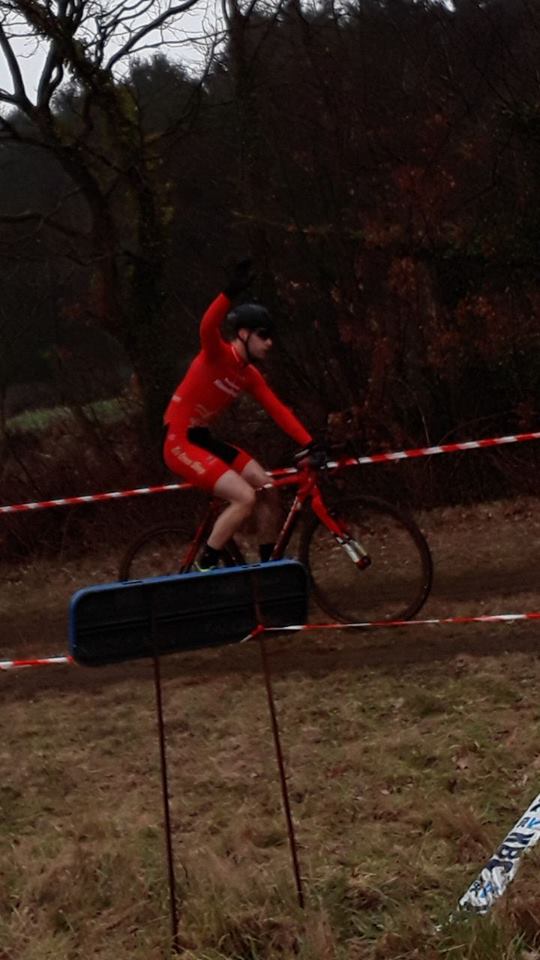 Kevin showing off in his 2nd last race in the season, grabbing the win!

Not only cycling took off this weekend, with 3 duathlon races our triathletes also kicked off!

In Jurbise our athletes found a muddy and hilly racecourse which pleased them all!
Our current vice-worldchampion duathlon (AG40-44), Wim was our guy into the top 10. After his race in Kasterlee we planned in a resting period, followed by 4 weeks of medium-load and a week of skiing…As many of our athletes know I dont feel any compassion with ski-holidays, so after a week without touching a bike he got a present and could race Jurbise…finishing 5th overall and 2nd masters can certainly please for closing the winter 🙂
A bit further there were Robby and Bart who found a racecourse they loved, hilly and tough…as they are! Robby loved it so much that he didn’t stop rolling in the mud at a certain point…Bart is in a good mood and could push himself towards 6th place in masters category. 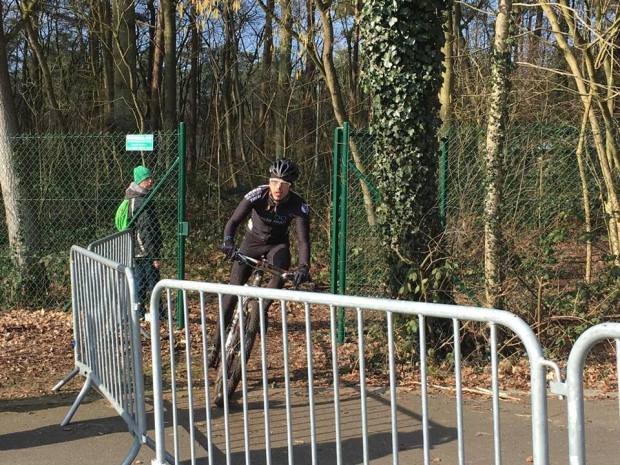 Bart moving up on the bike and getting a nice AG ranking!

In Hofstade X-duathlon, our athletes were also ready to race. With Tony taking part of the leading group and racing for the podium quite early in the race. Our other athletes all went out hard and did the best they could on this technical course, with a lot of singletracks in it.  Unfortunately Tony had a flat tyre and had to leave the race early, this also meant he had time to cycle home (60K)…and he made a nice day out of it :-)!

The other athletes all finished a bit later and it was in the women’s race that our athletes took podium, with Els winning the masters category! Today we heard many athletes who were glad to exercise their turningskills, so glad that they will put their MTB away untill autumn! 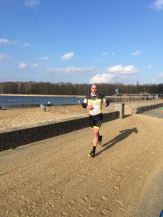 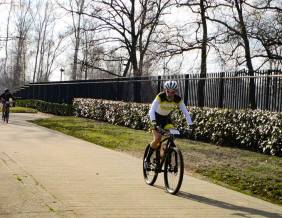 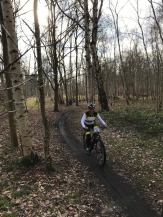 Also at the coast duathlons were raced this weekend. The Sandman Inferno duathlon (5K run – 40K bike and 10K run) was held. A longer duathlon, a tough racecourse…that might be something for a couple of our athletes…no?
It was Hans who was called favourite in the newspapers, after finishing 2nd last year. But this year, we aimed for this race as an A-race.
In both the longer race and the shorter (2,5-20-5) race many of our athletes took part in this event. For all of them a test towards springseason or even main goal!

Hans leading the race from the beginning and entering T1 first was a good beginning, during the bike he took the effort in his hands and did his own race before putting down the bike in T2. A hard solo bike effort followed by a hard and fast run is definitely a specialty of Hans. Another race was won in the 2nd run by pushing it hard untill the finishline. For Hans this winter had some great results in it already, with 1st place in Xduathlon Damme, 3rd place in Run and Bike Gravelines (France) and 1st place in Crosstriathlon Liévin (France) now he gets it all in his first ‘small’ peaking race of the season! 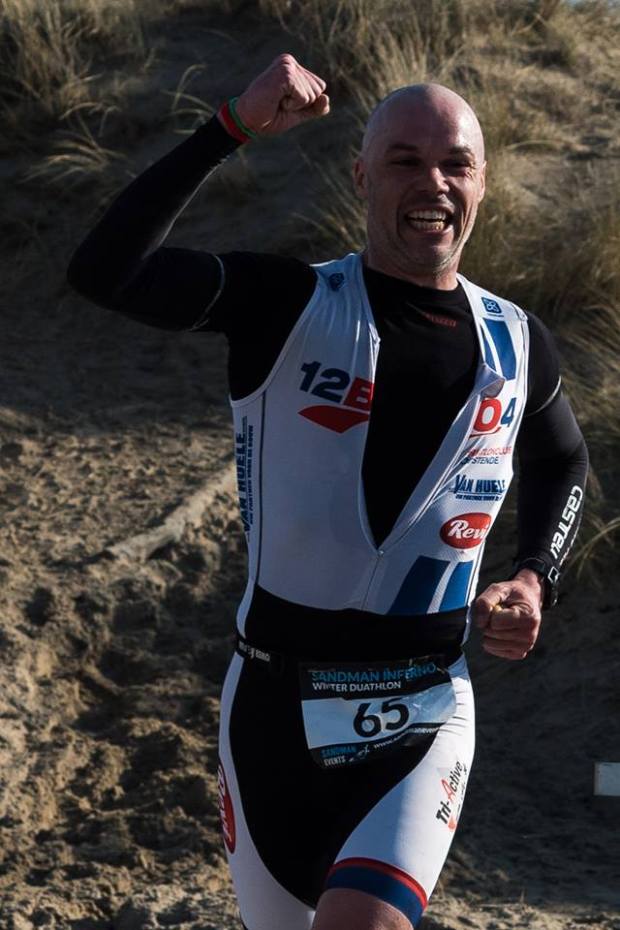 Hans winning this long offroad duathlon in style, fists up!

A bit further in the field our other athletes all seemed to battle hard and with several athletes in the top of the field and Johan just missing the masters podium (4th) the LD event turned out perfectly! 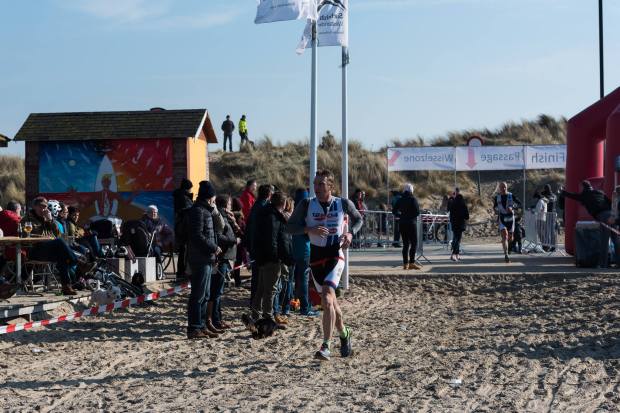 4th in the masters race for Johan, in his first season as Ironmanathlete

Broadcast of this race and Hans winning the race!

In the shorter distance race several of our athletes  played their role in the top 10 from the beginning of the race and it’s clear some have put big steps forward! But at the finishline, this highly intensive race delivered us a top 10 for Bart and Bregt!
For Bart his first duathlon, and sorry for pulling you out of comfort from time to time…but hard work pays off. In the end he got 7th and good step up the podium (2nd) in the masters category. 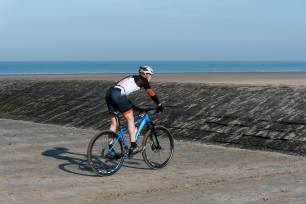 The typical breakwaters were also part of the obstacles! 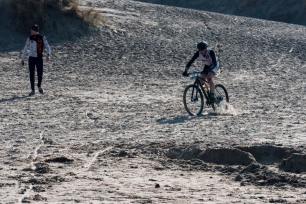 Hans showing how you ride off the Belgian dunes 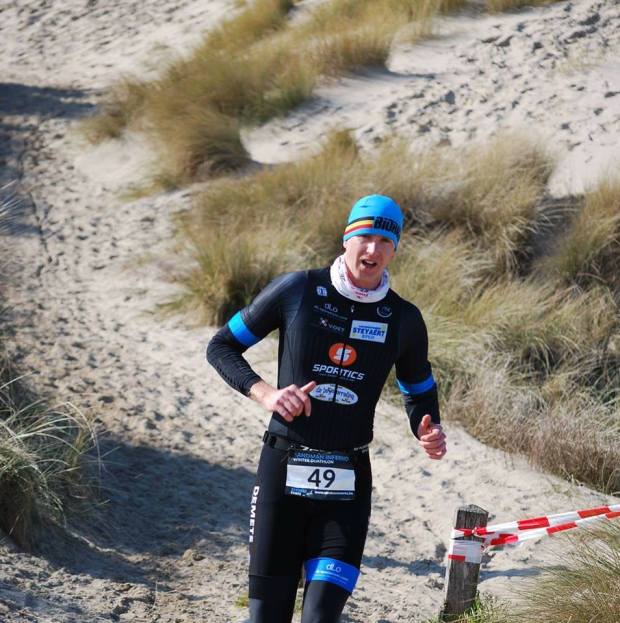 The running course lead the athletes through the dunes, Peter pushing his way through the sand!

In the female race it was Hannah who seems to like silver medals 😉 and takes 2nd place again! Definitely ready for what’s coming for her! 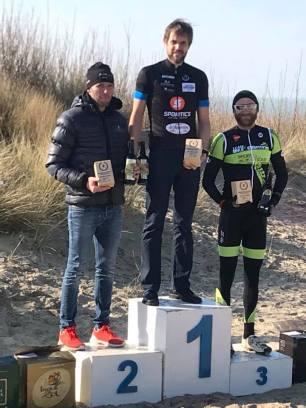 After this weekend there’s only 1 conclusion that I make, our group of athletes … has only gotten stronger, faster and more motivated than ever! This is also a sign we could see during tests and the winter groupsessions. But a group with the feet on the ground. I am looking forward to next weeks and months with confidence!