Quite an extraordinary weekend this weekend, the ONLY non-Ironman weekend of the summer for our athletes but not at all a weekend without races!

Saturday the weekend start grey, wet and cold in Belgium. Not a lucky moment for the La Gileppe Trophy Duathlon. Our athletes at the starting line would race against current Pro world champion Odeyn. Last year it was Tom who won this race with a super fast bikesplit, which wasn’t touched at all this year. Jan and Wim were directly in the front of the race and keen on a good performance. Both athletes are in full preparation of the World Championships on Sept 3rd. Jan could mount his bike 4th but the rain and cold took over his body and he had to let go his concurrents a bit on the top of the most important hill. Jan is an athlete who is used having a fat% between 4,5 and 7,5%.

Not a lot for racing in such conditions. With a fast offbike run, he warmed up a bit and could run towards 9th place. Wim from his side did (in my eyes) maybe his most astonishing race, because of the difficulty of the racecourse and race towards 3rd overall behind strong cyclist Lafourte and Odeyn. Wim wins the masters race of course. After his win in Gravelines (Sprint) another hammer on the block. 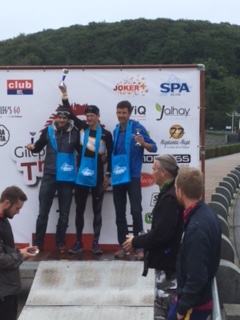 That said, we can say this motivates. Surprising results, are always nice to see!

David was ready for his last Half Irondistance of the season, in Medina de Rioseca (Spain) he raced this triathlon. With a good swim, a T1 where’s room for improvement and a super bikesplit he could put down his bike in….2nd position!

He was closely followed by a chasing group and quite soon he found himself comfortable in 5th position.  But David paced well and ran his 2nd half of the runcourse as fast as the first half which made him took over 4th place and finish 4th! 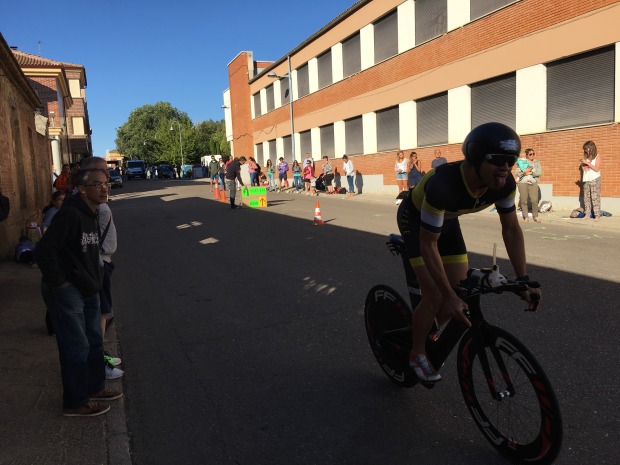 In Canada Andreas and Corey were ready to race in Porthood (1/4 Triathlon), for Corey the first race after a short break after his first half of the season with 2Xpodium in 70.3races of Quassy (USA) and Saint-Andrews (Can). While Andreas had his first post-Ironmanrace.
Corey took the lead of this race very early in the race to not let slip away victory! Another win for this strong athlete. Andreas from his side did a good swim and rode 1/4distance records to mount to 2nd position…the run is definitely his strength and like this he took 2nd overall place.

Earlier this week we had Adrian with an infection at his foot, antibiotics were needed to get his foot back to normal. A little wound that gets infected can give a lot of misery…fortunately Adrian got the right treatment in time.

Only friday Adrian’s feet fitted in his runningshoes again after a little infection got worse.

But shape was good and he was race-ready, with adapted training and some good sessions on the turbo on wednesday and thursday confidence came back and we decided to not cancel the race and see what would happen. His first run on friday went ok…so I was quite confident this would be for 90% OK on raceday. And so it was. Motivated to defend his last year’s title in Leiderdorp he defended his title well by finishing 3rd today! 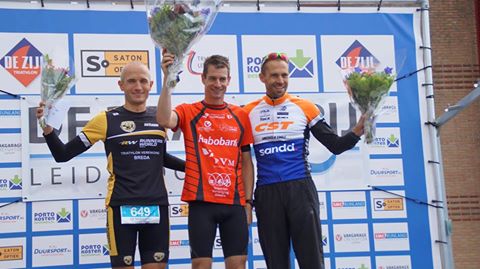