Today was a day marked in RED in our agenda ,

3Full Ironraces, 3 races that are totally sold out from the moment you can register! Next to these 3races we had David (Spain) and Corey (Canada) in Half Irondistances.
Our athletes went in this very motivated and ambitious!

Hans had a silent ambition to go sub9 in Challenge Roth (Germany), but kept silence till raceday. Doing a good race was the most important thing. When you are ready to race…stay cool, follow the raceplan and push the pedals when and where you have to! In Frankfurt next to Hans also Kurt started his first full distance of the season. After exactly 1h00′ Hans came to shore, a swim between 58-1h03 was what was in our thoughts. From there on, the real race starts.

Last month it was clear the load was correct, and would be paying off!

On the bike Hans smashed the race, he moved up towards leading position with a marvellous 4h32′ bikesplit. To get there he needed to push 279NP, which is quite a lot during Ironmanraces. We can say this the level only the AG TOPcyclists can manage. 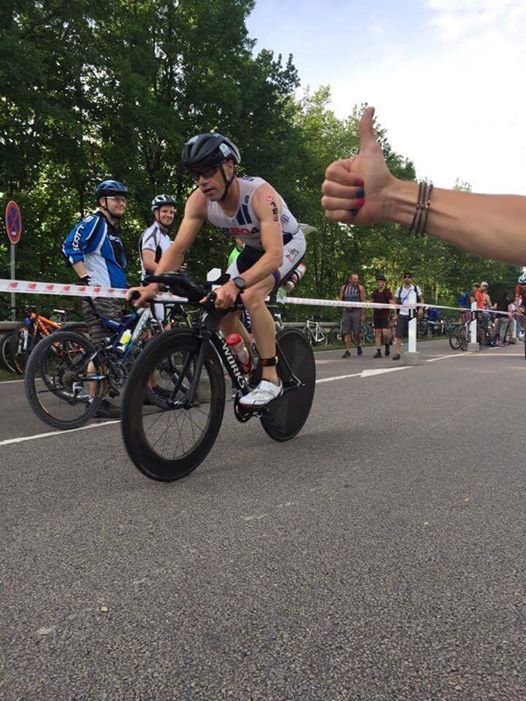 Image of the weekend, saying it all!

After his victory past April in Douai (LD duathlon) the confidence for the run definitely could be present. Hans went out quite fast to finally run a 3h08′ marathon following on the fast bikesplit! But what a racetotal he managed, 8h44′!! A good question could be, is this still an AG result? I say yes! Why? Because of his 5.30am interval runs on cold winterdays, because of his afterwork cycling rides. This is hard,efficient and smart effort falling together during 8h44′.

These kind of results as a coach really can give goosebumps! For sure triathlon is NOT about times, so let’s come to the classification: Hans realised 20th overall (PRO included) and 1st AG! Winning the AG in one of the biggest triathlonclassics in Europe is a 2nd cherry on his big cake already this year! A bit later Kurt finished Challenge Roth to close the day overthere!

Hans flying towards the finishline in 8h42′ in Challenge Roth!

In Frankfurt (Germany) Adrian, Raph and Pierre got out for their European Ironman Championships ! Good swims they had, Raph (57′), Ad (58′) and Pierre (1h05) swam for what they were worth. Raph and Adrian got on the bike together and would be riding in eachothers neighbourhood till just before T2! Pierre a bit further was pacing correctly from the beginning! Adrian and Raphael found themselves around athletes riding very fast and finishing sub9 later on in this race. It soon became clear that they would be entering T2 a lot faster than predicted…So 2possibilities were there: Perfect weatherconditions or overpowering a bit. Pierre from his side followed his powermeter and was riding to enter T2 after a 5h00 bikesplit. Untill he got sick quite early in the bikecourse, Pierre vomited several times on the bike. Every athlete knows that at such a moment your race is done…but Pierre wasn’t there to qualify, he already has his ticket! Pure luxury! Quitting was never an option, without eating he continued and put down his bike after 6h02′ of racing without food in the stomach.

Raph and Adrian raced hard more upfront in the race, after 5h48′ they could start running (already!) But soon came clear that the powerfull bikeride weighted on the body. Raph was slowing down after 10K and had to go on survivalmode to finish his first Ironman! Adrian could go fast longer on, but at the end he also felt the lost energy on the bike! Adrian could finish the race just above 10h in 10h02, while Raphael made it a case of honour to finish and did!

120K at 3,7watts/kg blew up the legs of Raphael during the marathon, simply too fast and a lesson learned! Adrian even rode slightly faster but also payed his efforts.

Pierre from his side could keep moving up despite the hunger he felt. The lack of sugars became heavy at the end but he finished his race in 9h34′ after a still decent marathon.

Pierre had a sick stomach on the bike and wasn’t capable of taking gels, he still tried to finish the race as good as possible and did well with a 3h29′ marathon.

In Vitoria-Gastéiz our athletes on the Full iron realised their goals to finish this beautifull Irondistance race! On the Half Iron, an elite level of athletes at the starting line. Next to the pro athletes the AG athletes tried to give their best! David was one of them! 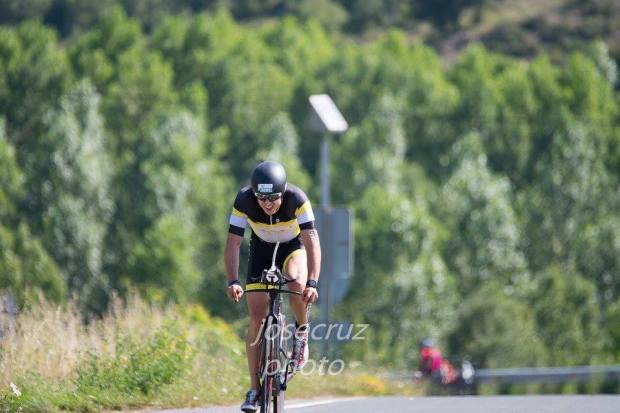 David pushing hard on his pedals to move up and finish 21st overall in Vitoria’s Half Iron!

After  a good swim he felt the power in his legs and rode himself to the front! Coming into T2 23rd overall he knew he could came close to the AG podium! With a good run in Basque country he even moved up a few spots and crossed the finishline 21st overall…and 4th AG! But what a bummer to miss the podium with only 8seconds behind nr.3!! Transitions? Socks? Details! But details sometimes result in that little extra!

The 275NP bikesplit of David made him come in touch with the AG podium, a fast run got him to 8seconds of it!

1more race to go, the 70.3 Saint-Andrews in Canada! Thé A-race for Corey in the first half of his season. Corey prooved in Quassy  and Baddeck already he was in shape, question was if it would be enough to get on the podium today in Saint-Andrews!
With a good swim the gap with the leaders wasn’t too big to get in the battle for the podium! Corey is strong at the moment, with a magnificent 290NP during this Half Irondistance he gets himself totally in the race behind Cedric Boilly and Robert Hollinger. Boilly and Hollinger got a bit out of sight and would end up 1 and 2 in the end. For Corey it was important to run fast off the bike! He did, with a 1h22′ half marathon following after his cyclingpart and ends up overall 3rd!

A 3’50/km run for Corey on a racecourse that’s not flat at all…coming off of the bike strong is important to be in the game for the medals!

Quite a busy weekend past weekend with also very good results of our cyclists on our FBpage!

This weekend was on it, our athletes raced hard and learned a lot. Recovery now for the athletes performing this weekend…but not for the others, because many big races are coming next weeks!!