Excited! That was how our athletes went into the Half Iron races Ventouxman (France), Troyes (France) and Quassy (USA)!

Ambitions for these races were high, but realistic. They were ready to race hard!

In Ventouxman, Alex got the heaviest race course he ever did in front of him, he managed well and can consider this as a perfect lead-up towards Ironman Klagenfurt (Austria)!

In Troyes, a bit closer to Belgium Cai and Inge were the female athletes. Johan, Steven, Hans and Sam the male competitors. With Cyril Viennot (France – 2015 ITU world champion ELITE) and Antoine Perche (France) the level would be high, and getting into the front of the race difficult! In the female race Julie Le Colleter (France – Multiple medal winner on French national championships and GP duathlon winner) would be the top of the race.

Hans and Sam sure are well known in France so not capable of racing in the shadow. This 2700-80-20 Half triathlon for Sam is a race between his 2 Ironmans ( South Africa and Lake Placid), For Hans the final lead-up towards his 3rd A-race of the season…challenge Roth (Germany).

Our athletes went out for the swim well and got out of the water ready to race the bike! It were Steven and Johan who came out first, before Hans and Sam…followed a bit later by our female athletes. 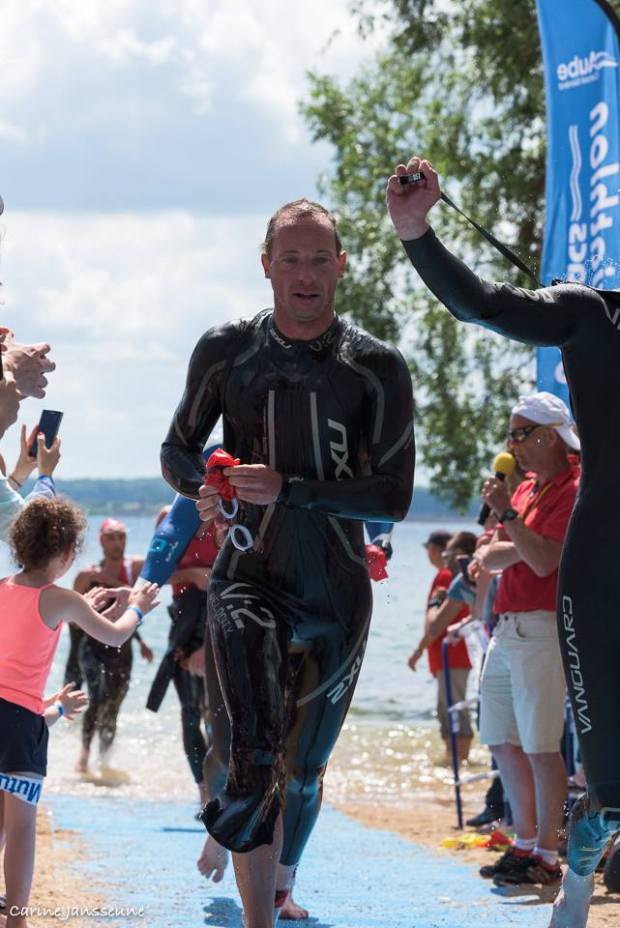 Steven first out of the water and ready for a very good race!

Once on the bike it was clear the power was in the legs and our athletes rode theirselves to the front. It was Hans who passed Johan/Steven first, followed by Sam riding a 300watt paced race and have a steady but fast race! 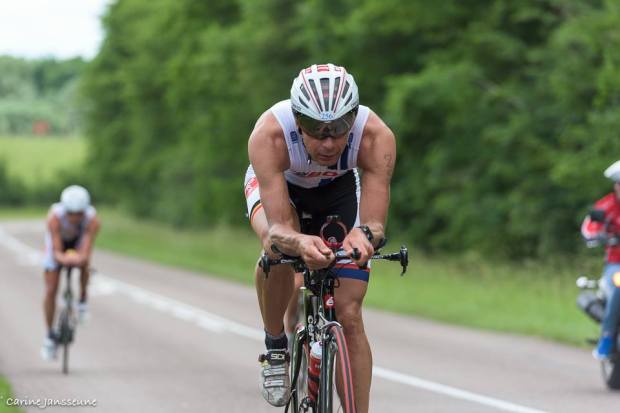 Johan and Steven on the  roads around Troyes, both chasing a good result.

Very soon it became clear that Hans was keen on another topperformance, trusting on his powerfull bike and fast run off the bike he was ready to…put down his bike 12th.
Sam followed a bit later. 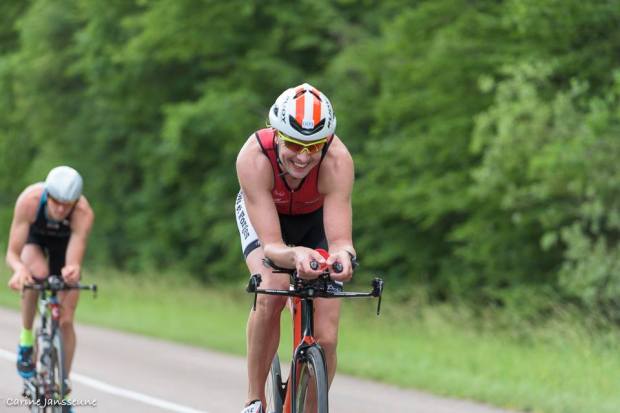 Sam shortly behind Hans going faster every lap and getting ready to run steady!

Meanwhile Inge was capable of getting into 2nd place in the female race behind Le Colleter and  it would be a hard mission to keep that spot in this field. Cai from her side moved up on the bike and as there was no +50 category she would race in the +40 cetegory. At the end of the bike she came close to the podium in that younger category. 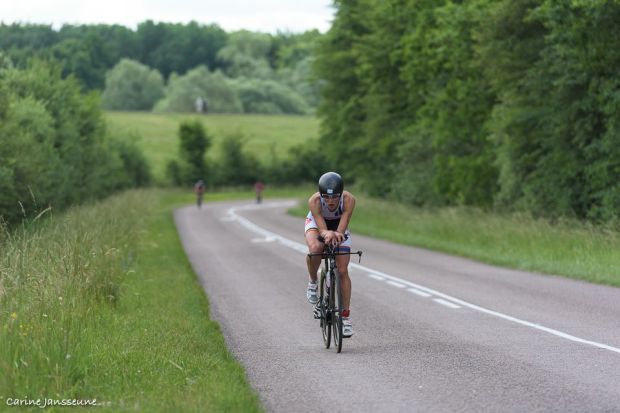 Another massive performance of Inge in Troyes, who rides towards the podium!

Hans puts a regular 313watts on the pedals and it made him move forward…fast!

Mostly it’s the run where all the fun becomes PAIN, but as we were in France…PAIN was only French bread. So feeling no pain…just dreaming of a big bread after the race…makes it work!

Hans and Sam both in pole-position for a top20 in T2 started running on a fast pace and they managed till the end. Hans with, once again, superlegs ran the 4th running split (!) and was capable of running himself towards 5th place! A place never expected before the race…in this field! 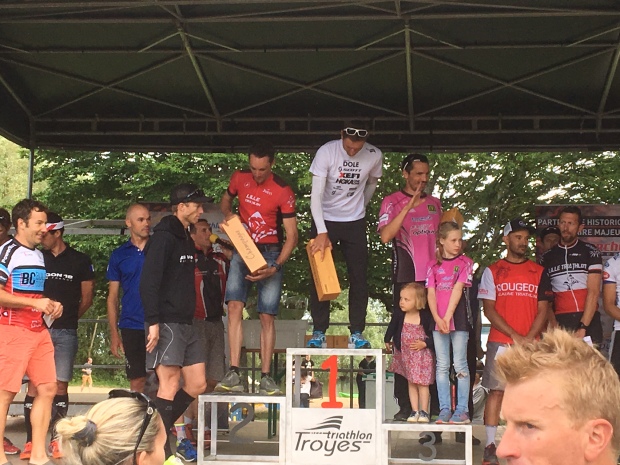 Hans is getting on the podium a lot lately and in Troyes it’s no different and well earned after a perfect race!

Sam kept his pace and ran a steady 3’55/km to end up 18th today and looks back confident towards his next Ironman after todays race!

Not so much later Steven finishes before Johan! The female race was still on at that moment and Inge, who feels very fine on training lately, was going for a very strong race and didn’t only win in the masters category, but also got 2nd overall! 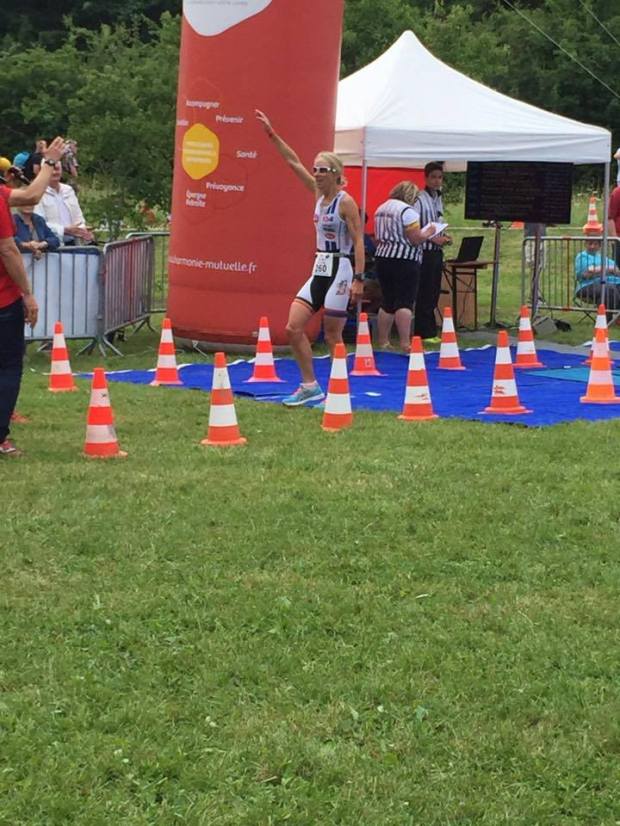 2nd place for Inge in Troyes, and she can look back happy to that!!

Not too far behind some other female power was on her way to the finish, Cai who got 7th (masters) did a +/-20′ faster race than her last participation in Troyes!

Cai running off the bike with her faster pair of legs!

In Quassy (USA) our Canadian (and Swiss) athletes went out for a first A-race of the season. For these athletes it would directly be their first tri of the season…not an easy one to begin with! 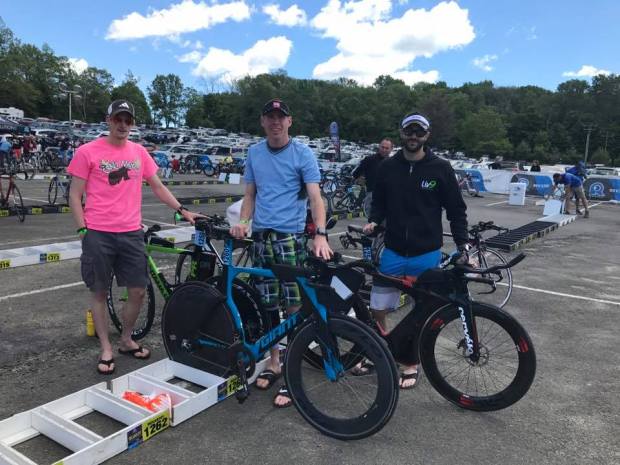 During winter they worked a lot on their swim effort and it payed off. Corey and Allan came out of the water quite close to each other…but Andreas kept contact also! And that’s a good sign towards the Ironman coming!! Happy about this!

Once on the bike the mission is to move up, to be capable to start running in the front of the field! Corey really unleashed his legs on this heavy race course…the bikecourse had +/-1300 D+ for 90K and it made him move up towards pole position for the medals after he bike!

A bit further both Allan and Andreas made their way towards the front a bit less aggressive but ready to start running well! Allan had a bikecrash only 3km before T2…which fortunately didn’t stop him from moving on!

I knew these athletes were running well, but how would they run after the bike. I consider this after bike run as a specialty and knew they trained at the right intensities and  right volume to get this in balance. And they did. All 3 of our athletes put down a top 10 running time in the end…and Corey he smashed it! With 1h21 on 300D+ (!!!) running course he could get himself on the podium of this Rev3 in Quassy! 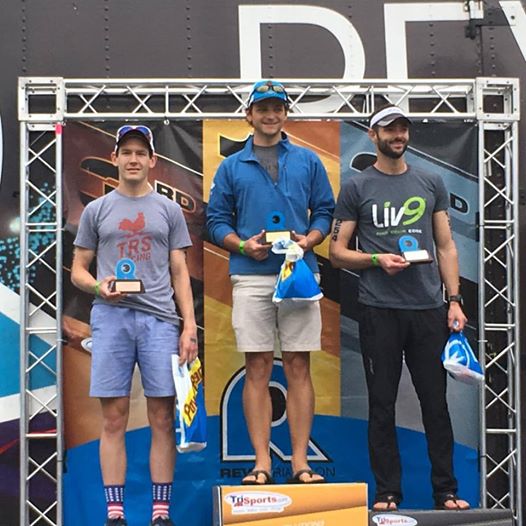 Allan and Andreas came close to top10 but just stayed out of it on 11th and 12th place with a fast run off the bike! They didn’t miss their start of the season and with another race in a few weeks this is good for the confidence! 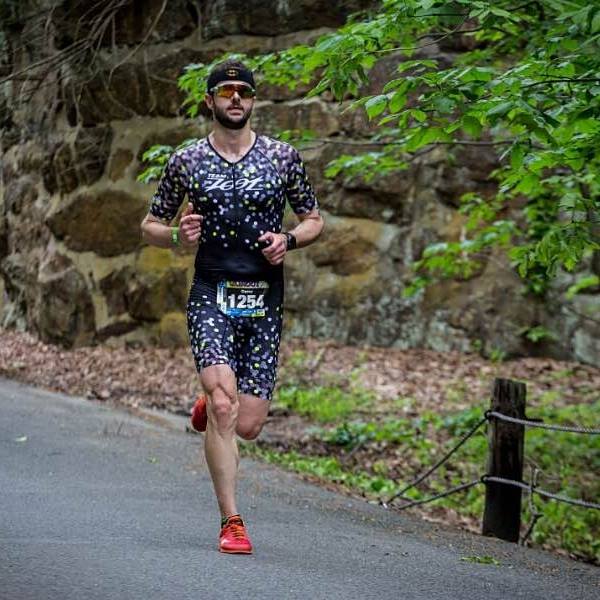 Corey ‘smooth’ on the runcourse, heading towards the fastest run!

Not only raceday in France and Canada, but in Belgium our athletes raced fast in Meer, L’eau d’Heure ,… and a special format: “Swike”. This is a ‘Swim-Bike’ event. A bit like a triathlon without an ending…but ok! Anyway for this edition it was one of our younger triathletes Pascal who managed his first podium of his career finishing 3rd!

Fast swim of Pascal, and bringing some salad home! 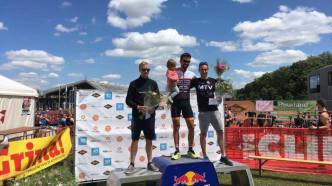 The first podium for Pascal in his young tri-career!

For Anthony it was retake of races after a week out of competition to rest a bit in an already nice season!  Svenne is recovering from his crash and at the moment we only do electrostimulation on the muscles.
Guillaume from his side took 9th on saturday and today in Grace-Hollogne, on a tough bike course, he chose to attack. At the end of the race he found himself in the lead group but a tactical choice broke this group in 2 and Guillaume had to be satisfied with 4th place! Not easy for a hungry athlete! Week by week this rider is in the front…there will be other opportunities. 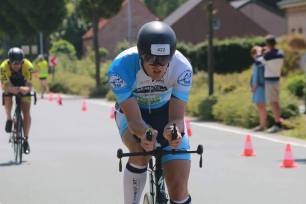 Our athletes racing around Belgium

As we coach (a strictly limited/exclusive) small group of youth cyclists, we don’t often put info about these young riders online, simply because I don’t want young athletes put under pressure. But we are glad to announce that one of our young riders could take the regional championshipsjersey (road cycling) this weekend after already having the regional championshipsjersey in the cyclocross competition.

We have a past, the present and definitely the future. A future with well motivated people structuring their sport into their life!