The only difference with bears and other animals after hibernation is that our athletes don’t have regular caves…their training’caves’ are made to come out of winter in shape!

Today was the first big day of the season for our Ironmanathletes, goals were set and realistic. All 3athletes were keen on…getting a slot for the Ironman World Championships in Kona, Hawaï! The dream of many long distance athletes…simple? No! Not at all!

We were expecting a high level of athletes in this race, in the pro-field…but above all in the AG (non-pro) field. That meant our athletes had to be in shape, but not at all cost. I like to have a little bit of reserve into the prep towards an early IM. If one qualifies…ok, that’s an early good shot. If one doesn’t qualify…we take another chance later in the season! The athletes involved in this race are amateur athletes, with a big willing and day in – day out consistancy. A spirit of no-nonsense and taking care of the body with a close eye on practicing high level sports on a healthy way!

To give you a closer look on just 1 specific difficulty each athlete had to conquer oftenly, maybe you can find a difficulty of yourself in it:

Just to show, that every athlete has his difficulties. Like everything…the way to approach the difficulties makes the man/woman in the end…today I can say they approached this as champions 😉

The swimcourse in SA is known as being quite difficult, you can see this at the times the pro athletes swimming times. Our athletes at the starting lines are not our ‘fastest’ swimmers. But that’s no issue at alle, a triathlon is about how fast you are beween start and finishline, the rest are only numbers 😉
It was Sam coming out of the water first (1h06), I remembered his 2015 AG win where he swam almost 2minutes longer. So I knew that was quite OK in order to get in front of his AG! Pierre also had a 3minutes faster swim than last year and Cai, who wanted to ‘feel free’ in the water and had a non-wetsuit swim was faster out of the water than her IM SA 2016.

On the bike Sam directly managed to move up, we planned a conservative pacing with only 260-270NP ;-), not having any high peaks and build up during the race! This worked very well, after the race we notice no other AG athlete could come close to the speed he produced (except for 1 athlete who rode 2′ slower but crashed a bit on the run). 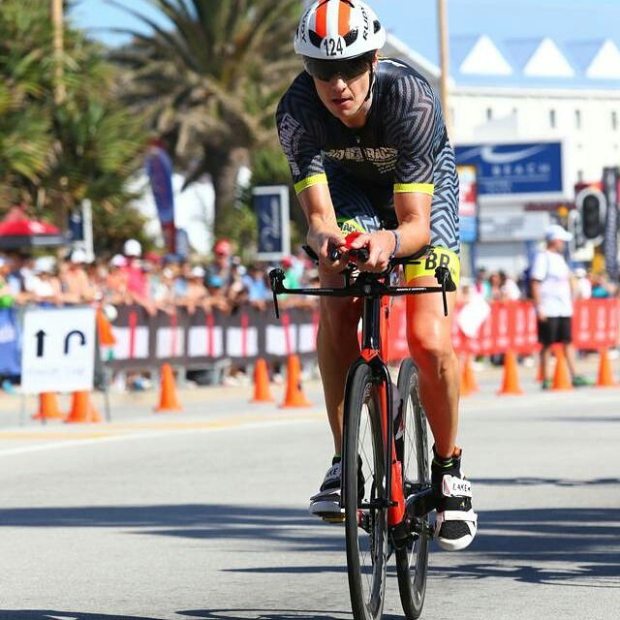 Exceptional into this is the fact he had nobody of the same cyclinglevel  around him. With a 4h38 he moved up towards the top positions in his AG. But a fast run had to come out of the legs to get on the podium!

Sam managed a consistent bikecourse, putting down the number 1 cycling split with 265NP!

Pierre was very annoyed only 12hours before the race…dead battery in his powermeter…ouch! Not the best moment for having this of course. So change of plans and pulse-pacing! No real problem, but if your mind is set on the powernumbers you need to make a mental ‘click’ in the head. He did! On the bikecourse Pierre moved up towards  32nd position in his AG before putting down the bike. Our cards were to play on the run….

Pulses, not at all old school. On raceday definitely a good pacing strategy!

Cai, who came out of the water 10th had to move up on the bike, her strongest discipline.
She moved up towards 5th position at the end of the bikecourse and could start running where we expected her to be. The mission definitely was to run faster than she ever did in an IM!

On the run course we could immediately see the fast first 10km of Sam. What we know of the past is that…if Sam has a bad off-the-bike part that it’s mostly at the beginning of the run. He didn’t have that and we could already dream of another IM podium!

After 21km he averaged 4’08/km…that’s FAST! But in his 2nd part of the marathon there was hardly a slower pace to finish at…4’15/km, all of this after riding the fastest bikesplit…looking a bit further we see he also ran the fastest AG running split with this 2h58′ marathon! Really Amazing, once again (after Klagenfurt 2016) racing a sub9’er (8h51′) and taking his 5th FULL Ironman podium in exactly 2years! 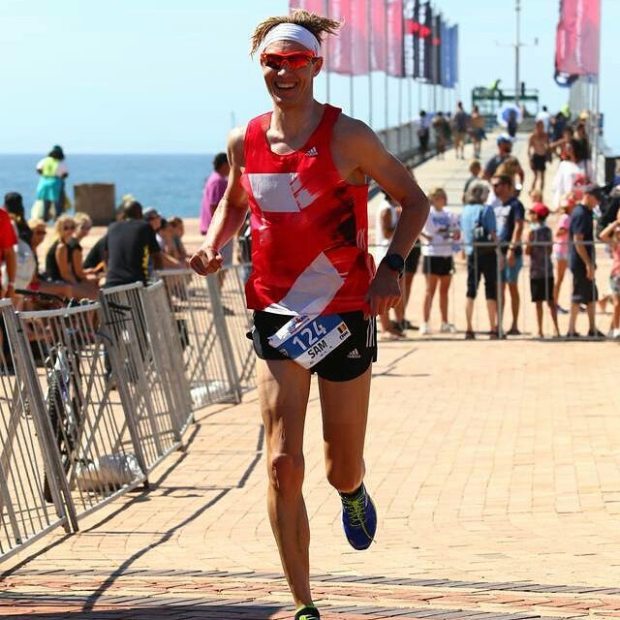 A well paced marathon of Sam, in which the engine kept ‘running’!

Sam (42years and getting better by age 😉 ) finished as 2nd overall AG athlete, and 22nd overall (Pro included) today. It was former Pro-athlete Godart (Lux) who takes the overall AG win and category win in this strongest (!) AG. We congratulate Olivier for this victory and whis all the best in Hawaï. Here’s the story of why Godart turned AG athlete again.

Great to see Sam is among the PRO-athletes, being a ’24’ years old AG athlete! He didn’t have a ‘pro-life’ leading up to this race and even did every single swim-bike-run in ‘ergo-style’!

Pierre was doing the impossible and very soon he appeared within the top15 of his AG. BUT it was very exciting, he was running super fast and passed halfway on a 3h10′ pace…the densification in this AG (for the Slots-position) was huge. But Pierre felt great and had wisely decided to not go faster in the first part and try keep this pace as long as possible…well he realised something none of our athletes managed before in an Ironman. He ran exactly the same pace in his first as 2nd part of the Ironman! Not 1 second of difference! After his 3h10′ marathon (12th overall AG running split) he got 7th!! More than enough for his Kona-ticket!

That made our athletes already go to Hawaï with at least 2! 2out of 2…it seems ‘normal’ but I can not say this isn’t a relief for a motivated coach…now we can work ‘relaxed’ towards Hawaï 🙂 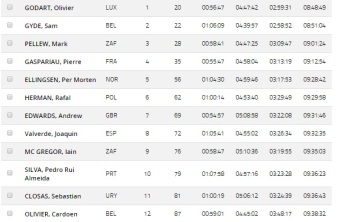 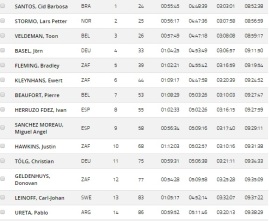 The Kona-qualifiers 2017 in Pierre’s AG

Pierre does it again, stronger than ever before with a 3h10′ marathon he qualifies for the Ironman World Championships in Kona, Hawaï!

And…then there was Cai, still in the battle for her AG-podium. She was tough on the marathon, was able to run her fastest marathon ever and finish within the TOP-5! Unfortenately the women’s Agegroups don’t have the same number of slots for Kona. Probably only the top2 will have the capability of going to the race in Hawaï! So Cai gave a present to herself and registered for her next Ironman at the beginning of July!

I can’t be more proud as a coach than this…our athletes gave the best of themselves and nothing more was in it! Races went perfect and our athletes went into this race with ‘grinta’…lots of it!

Also in Holland we had 2 athletes racing the Hoorn-duathlon, Jan and Adrian had a pretty close combat on a fast race course. They went all the way and Jan got his first podium of the season, finishing 3rd overall! Adrian only a tiny bit further took 6th!

Adrian in the chase group trying to hunt down the leading pack with Jan in it! 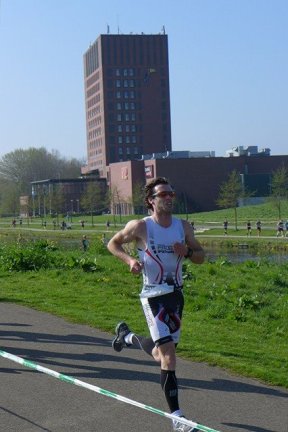 Jan in his well known running style getting another duathlonpodium for this 4* AG world champion!

Fast race course at Hoorn, something for the TT-specialists!