Some weekends I remember forever, past weekend is a weekend that will be such a week !

Let’s begin with Ocean Lava Aranjuéz (Spain), David Tovar  is doing a great season and in his 3rd A-race of the race he amazed  everybody by getting a 3rd overall spot!

With a good swim, a well dosed bikecourse he ran himself towards a spot on the podium!

A little confusion by girls in bikini in the last K made him make an extra loop and loosing 2nd spot by 1second! (Focus David!!!)

Later that day we had Jan racing in racing the national Championships Long distance Duathlon in Holland, and everybody who knows Jan…knows he can do special things. Well, this first. If did his race a bit slower he now had a son with Dutch nationality…

Only a few hours after the race Jan became father, congratulations champ!

A flat and fast race course, only 5gears were enough, who needs 11speed?

Jan did a superrace and on a flat race course he could limit the gap with the TTbikes and discwheels. Jan races with a froadframe and no aerowheels. It’s no coincidence his former employer is named Eddy Merckx. In true flandrienstyle he put the bike in T2 and runs the best 2nd run split and becomes 3rd! His  3rd duatlonpodium this spring! Now a short competitionbreak till summer because…his pregnant girlfriend, who went with him to Holland gave birth to a son 12hours later! Congratulations to (J)an!

Belgium got its first triathlon ‘fun-event’ with a Swim-Bike/finish in Harelbeke. Not yet a great succes when it comes to participants but certainly this can be a good intensive workout! A few athletes tested this event and liked it except for the ‘no rules, everything allowed policy’ during the race.

If you balance right between intensity, strength and endurance you get high performance. With 363NP at the end of load block someone is ready to shine at least once.

While in Canada tri-season is slowly starting up our athletes are getting ready another podium for Corey and Allan on a road race and looking forward to their first tri overthere!

Alexander on the swim

PJ aka ‘The Hulk’ out of the water

Tom finishing 20days of tough training with a TT-win on saturday and his first swim longer than 500m followed by the best bikesplit!

I would be happy if the weekend stopped there, but then there was sunday. While some athletes suffered in Almere (Holland), L’eau d’Heure, Jona-Rapperswill (Switzerland) and Meer we had athletes racing in Troyes (France) who did a fantastic race. Hans finished 9th in a strong field of athletes, while Inge…became 2nd behind French Pro Isabelle Ferrer. Being first year of Master, she is stronger than ever!

Her husband Steven did behind them a very good race finishing 34th and is now getting closer and closer to Norsemann!

I just could post the powerfile of Hans, knowing he’s a strong biker. But I won’t, because he ran fantastic! The focus for Hans is on Long distance (non-drafting) triathlon and if you can’t run, you’re done.In Douai (France) he prooved to run fast off the back and  in Troyes once again he realised his performance by putting down his bike strong…but he ran to his 9th spot. Triathlon ends with running, if you can’t run…you can’t get big results!

The only thing I can say about his powerfile is that he has beaten the Half Iron power record of our athletes.

In Germany and Luxemburg it was time for some cyclingraces! Anthony is doing a very nice season, but getting on the podium wasn’t too easy till now! In Schleiz (Germany), there was the next manche of the German Cycling cup. He didn’t miss the right breakaway and sprinted for victory, finishing 3rd we can be very happy with his result!

Anthony finishes 3rd in Schleiz (Germany) and is ready for more!

In Longchamps Svenne raced the way we talked about the day before. It was very simple, the bike course was super tough with a lot of climbing…so tactics were “Attack at the starting line”. He did , and it was the right breakaway. Svenne finishes 3rd! No further comment 😉

Our female athletes run fast off the bike, but even faster without a bike. Pas  sunday regional Championships Half marathon were held in Ieper. Gwendolyn went for the podium and got back home with a podium! The winner was outstanding, and Gwen got 2nd in 1h21′! 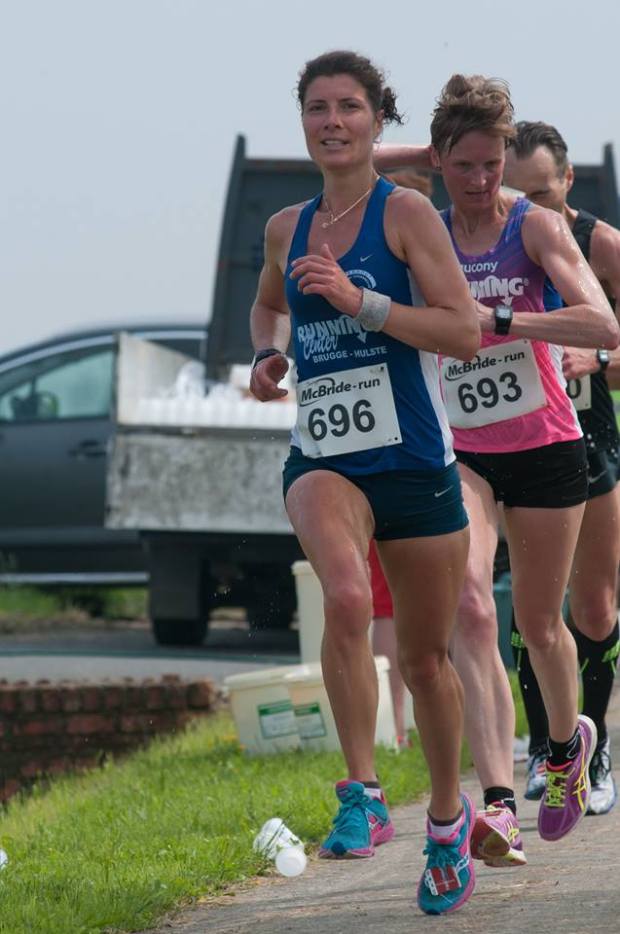 Gwendolyn running with a lot of determination towards 2nd place in 1h21!

Last but definitely not least, Ironman Nice (France) was a big challenge for Bart and Bjorn! Both followed tactics, and finished within their dreamgoals and had a super experience.

The bike check-inn, no way back…but Bjorn could happily check out after the race!