Athletes are constantly looking for the most efficient position during a time trial, or triathletes during their non-drafting event. Of course if you are a “drafthole” you can stop reading here ! Or not…

In my opinion it still is “the puppet on the bike that makes the bike dance…”. After this report you can certainly make your own conclusion about that. There are legends in cycling who tried new positions. We can recently think  about Landis with his high arm positioning, but in my mind the most remarkable athlete on that part was Graeme O’Bree, the man was simply a genius, an inventor. He made his perfect bike out of a washing machine. Later no athlete ever has been that creative anymore. And maybe never will, because common sense believes an expensive bikeframe is a good bikeframe.

O’Bree was a genius and reinvented the bike. He made other cyclists think about positioning. He was more than a cyclist.

It was in his opinion that you don’t need the most expensive gear, but your position,  a good wheelset, chain and  good functioning bikeparts made your race.

It’s also in my opinion that expensive bikeframes don’t make you cycle better. Your physical shape, your positioning, and good working gear does. When I look around between my own athletes I can make the conclusion that one of my  strongest TT-specialists won several ITT-races on a rebuilt roadframe of around 10years ago. But there’s 1 thing right about the bike, he’s positioned well on it!

One of my athletes, Sam (Gydé), is a hard working amateur athlete performing on a very high level and is also constantly looking to test new gear and looks at the efficiency of it. In that opinion he recently did a windtunnel test to  see, feel and test different positions in different situations in a Long Distance Triathlon event.

Sam had the chance to do this this at Flanders Bike Valley very recently!

The Graphs and photos below are all property of Flanders Bike Valley.

Important to know: Every test is done during 8minutes at 40 and 50km/h. So make the conclusion yourself if you ride slower or harder in  a triathlon to what might be the benefit of it for you!

I ride with a frontal drinking system, if I cycle without drinking or with drinking do I have a lot of drag?

Do I need a helmet with a visor or  without it?

Here we notice that at 40km/h there is almost no benefit for the one or the other. But going at higher speed we notice there is more drag with a visor compared to no visor and only sunglasses. We were astonished by this, but why buying a helmet with a visor if you have no benefit of it… Especially  in triathlon an open  helmet will be a bit more refreshing. Something to think about…

Putting my head down and the tail of my helmet up, how much more drag will this give me?

I think it’s quite an important amount of Watts saved just by looking to the front and avoid looking at your HRmonitor or just at your frontwheel. Many athletes make this mistake, once going very hard they start looking down and make a lot of drag. If you look at the speed, you see that in shorter distance triathlon events with high avg  speed this can be an important issue.

Sam compared several shoes, all high quality brands…and this came out. We compare with Lake because Lake Cycling is one of our high quality partners. It’s clear that the aero benefit of different kind of shoes have no influence on your bikeperformance. Of course a good fitting shoe is much more important to bring the power from the foot  over the crank and the chain towards the backwheel. So pick your shoes based on the fitting of it!

Are my clothes influencing the drag? 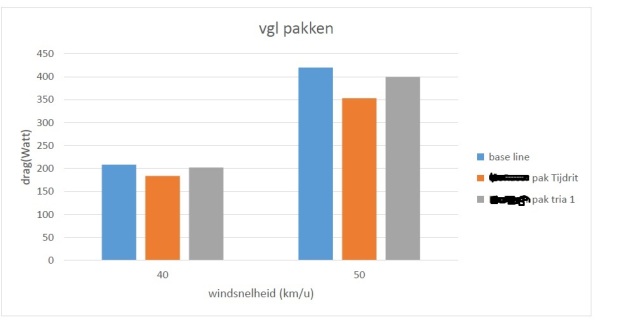 Well this is very clear I think, specific Time Trial suits seem to really advantage the bike effort compared to Triathlon clothing. But of course, you will not be able to swim or run with comfort in a TTsuit. This also shows the specifity of clothing. In long distance triathlon there certainly is the search to reach the level of a TTsuit. But it’s also clear that if you put on a cycling jersey during the cyclingpart, make sure it’s an aeroshirt!

Brooke (Can) racing in a regular cyclingshirt during an Ironman. But aero of course!

Is it beneficial to put my aerobars higher or lower? Do I need to sit to the extreme to ride fast? 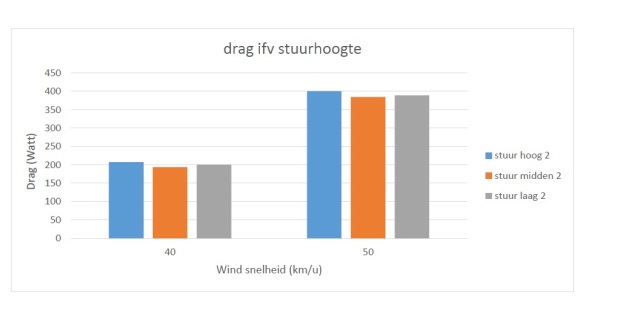 Each position has a difference of 1cm in height. If we look at the  40km/h wind speed we notice there is almost no difference in drag. But still, I would advice to short distance athletes ( ITT -sprint or 1/4 tri) to sit in the most aero possible position. If you are a LD triathlete you should be racing in the most comfortable position of the three positions. The benefit you have by getting as aero as possible is too small to take risks on that part.  Athletes who race their Ironman at 30km/h should not even have to doubt about it!

The last test Sam could do was testing how beneficial it was to take risky positions in a downhill. He tested 3 different positions and there was no big benefit for one of these three. So in a downhill, play safe, be aero and push the pedals where you can instead of taking risks!