In Ironman South Africa we had 3 athletes going for their first race of the season: Sam, Cai and Pierre. Halfway the bikecourse Sam and Cai were close to get on their first Ironmanpodium of the season, while Pierre was pacing like asked.

Earlier in the morning Sam woke up with GI-issues and slowly he ran empty. Once off the bike he decided  not to run and overload his body. In Klagenfurt Austria he gets another chance which he will fully take!

Unfortenately Sam woke up with GI issues, which slowly emptied his tank. His HR shows us how he ran empty after 130k

And so chances to get a podium or a slot for Ironman Hawaii for one of our athletes got smaller, BUT both Pierre and Cai were well trained and in shape to race hard. Cai came off the bike as 3rd, Pierre put his bike in T2 as 18th. So both were in the game for their ticket.

Sam testing his new bike, but having GI issues, now he knows how to finetune he bike

Cai paced her  race very well, and once on the run she could keep fighting for the podium. Unfortenately she missed the podium by 1 spot. Knowing this was her agegroupwinner, we can say she earned the podium!

Cai – Mum, doctor, triathlete,…and raw- may be very proud of her performance, we’ll get her an earned bronze medal ourselves!

Pierre ran out of T2 very fast, we knew by his prepraces his shape was very well. But how would his body react on running off the bike after 180K? Well, he kept on going and ran a consistent marathon, which resulted in a great performance. Pierre who chased his slot for years now became part of the Ironman Elite winning  his Slot for the Ironman World Championships Hawaii! Well Pierre, you can book your flight to Kona!

Pierre was a bit nervous before raceday, big waves in SA! But this never took his mind away of chasing a dream: Qualifying for Kona!

Sam:”I tried but it was not going to happen. I came for the win – no other race plan, so it would be silly to waste more energy.” Sam started his road to Ironman Austria yesterday!

Here he is, the CondrozMan…winter is much more severe over there than in the rest of Belgium and still…he qualified for Kona,Hawaii! A relaxed, stressless 2016 towards Hawaii is left! Enjoy!

In Portocolom 111 Arne and Stefanie took part of the game! Arne had an irregular winter behind him and it would be hard to push back the 100hilly kilometers. Halfway he was doing well, but then he felt u can’t fool the basic principles. An early spring race is a good way to think and work from towards the rest of the season.

Stefanie went out with ambitions, but after the national Xduatlon championships she suffered of some kind of virus, with only  4 weeks left after these nationals,a long nighttrip to Mallorca  and of course studying things weren’t always easy. But still, the date of the race stayed the same: 10th of april. During the last 10days slowly she started feeling better. Stefanie didn’t ride her PB wattage on the bike and that must have played in the head. But with only 14watt NP

less than her victory rides last year she did what was possible that day. Emma Bilham sure was a deserved winner, Stefanie at the end of the race took a nice podium again and got 3rd. An athlete with ambitions and sure tough and beautifull races coming! 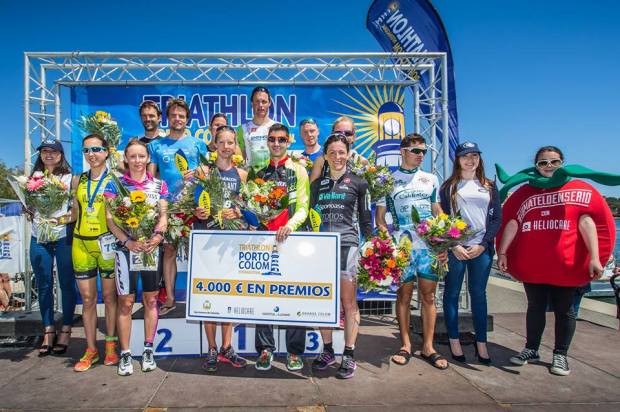 Stefanie gets 3rd at the 111Portocolom behind E.Bilham as a winner. And look who won the men’s race 😉 Congratulations MVC!

In Florida70.3 Ironman Allan and Andreas, both hungry like wild wolves towards their first race of the season, had a great racing location. They left cold Canada behind them and chose for the heat of Florida! Both were well prepared, a lot of their sessions were done indoors and feeling the road under their wheels must have given inspiration.

Allan took off very well on the swim and immediately was in the front of his game during the bikecourse. Before the race we targeted a certain amount  of power to ride which he could maintain without blowing up his body. With a good off bike run he could keep his spot and finished 13th in this IM70.3

A hilly bike course – but a steady ride, the perfect recipe for a good off-bike run

Andreas did what u never must do before a race, forgetting to bring a wetsuit! So it was a non-wetsuit swim for him! Still he did well, but lost 1-2′ and got more stuck between the slower bikers.So chasing was his option…and so he did! Once off the bike he also felt great and with a 1h26’run on this hilly course he moved up to 17th position!

Earlier on saturday Jan realised his first overall win in one of his favourite Dutch races at Ter Idzard. This 10-40-5 non-drafting duathlon came after a good 10 days in the Italian mountains! This is a race that’s  very satisfying, last year he crashed very hard and now he showed that an athlete is only defeated when he gives up! Fight back, don’t play Calimero, and try to be the best you can! Jan did…everybody can! 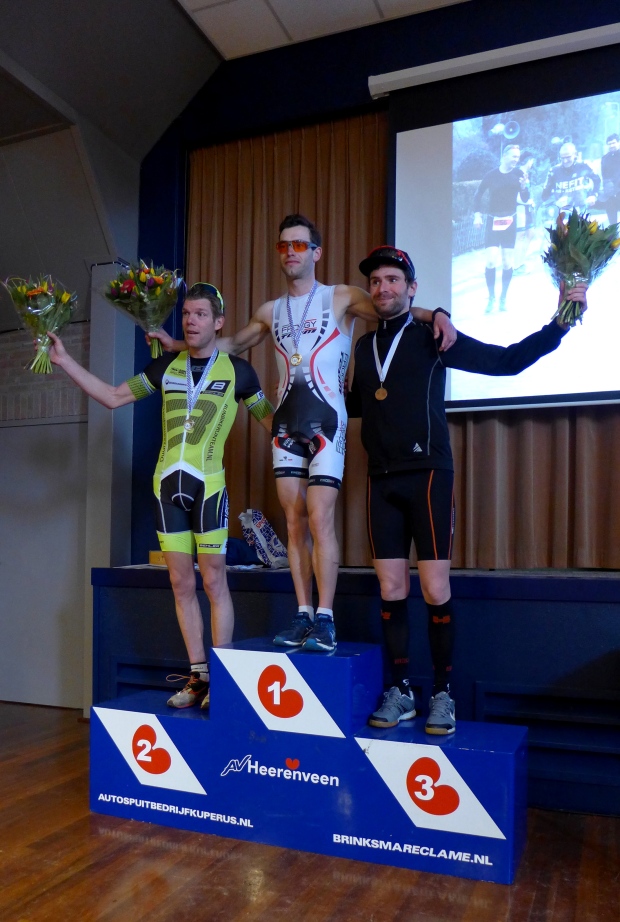 “Fight back after your crash, fight back and try to win (and stop eating Snickers)!” is what we said to Jan. He did! Look how proud a man can be!

Also our cyclists are doing great, we saw Maarten and Svenne always in the breakaway at Diest (1.18) and this resulted in another podium for Svenne! He is doing super this season, and already very early in the season. While Dries and Anthony had regional championships road cycling, both did a good race and seem to get back on track after their crashes! 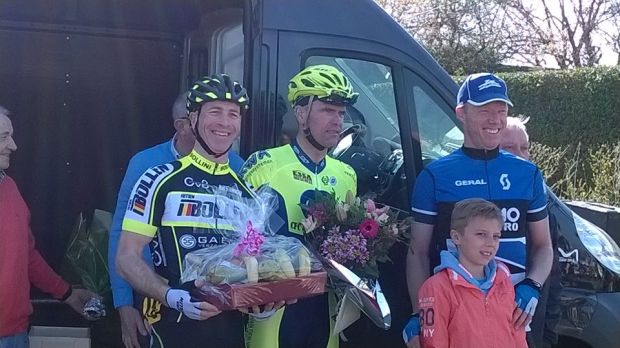 Svenne is about cycling and smiling in one sentence, he loves to train…and loves to make the races! 3rd and a lot of healthy fruit to eat – aged 41 he’s only getting stronger it seems.