Some while ago we started introducing our athletes from abroad…let’s continue this and get personal!

Hi Allan, can you introduce yourself to our athletes and sympathizers?

My name is Allan MacKenzie, I am 33 years old and I live in Sydney River, Nova Scotia, Canada. I work as the Atlantic Regional Manager for In.Business at Cape Breton University. I was always active growing up, playing mostly team sports (hockey, baseball, basketball). I also ran cross country in high school, but did not treat it seriously. In 2005 I ran my first marathon and my goal was just to finish. It wasn’t until 2007 that I started to take the sport more seriously and upped my game with the goal of qualifying for the Boston Marathon, where I completed my 8th marathon in 2008. Also in 2008 I decided to give triathlon a tri. I completed my first 2 sprint tri’s in 2008, my first Olympic in 2010, and my first 70.3 and Ironman in 2011. To date I’ve completed 21 full marathons (2:49:21, Philadelphia, 2014), 5 70.3’s (4:37:22, Challenge St Andrews, 2014) and 4 Ironman races (9:56:31, Ironman Mont Tremblant, 2013). My personal bests are in brackets.  I am first and foremost a runner and this is what I would consider to my strongest discipline. I’ve improved a lot over the past few years on the bike, which used to the weakest of the three. Swimming is without a doubt now the weakest of the three disciplines. 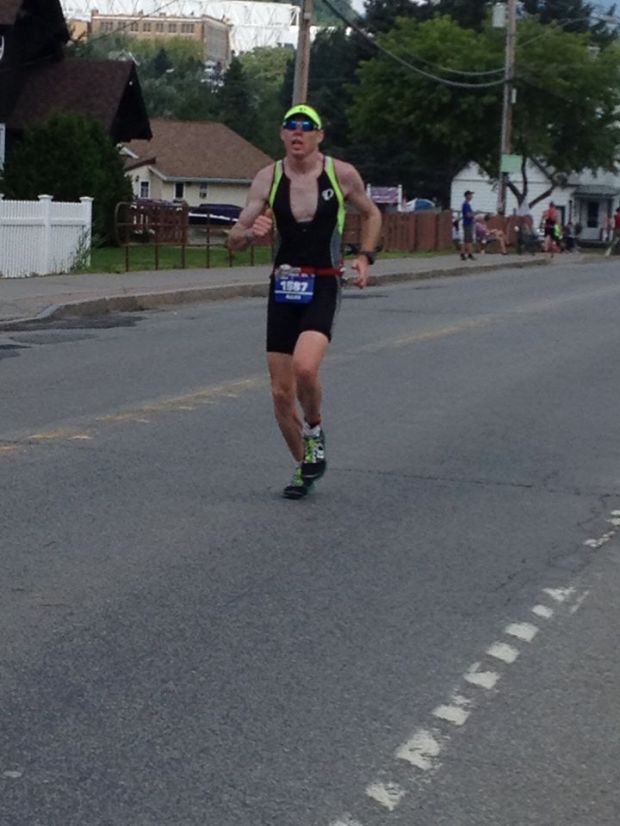 Canada is full of snow in wintertime, how do you solve this for
running and cycling?

Running – I do as many of my runs as possible outside because I’m not a big fan of the treadmill. If roads are snow/ice covered, I’ll do my speed/tempo runs on the treadmill at the local YMCA. Over the past month my time has been split very close to half and half (indoors and outdoors).

Cycling – I do 100% of my cycling in winter on the trainer. I used to dislike the trainer but ever since I got a power meter I enjoy it a lot more. I watch lots of TV and listen to music to pass the time away.
Have triathletes in Canada have an easy access to swimming pools all day
long?

I have lots of options to swim on a weekly basis. I am part of a masters swim group that swims 5 days per week (a 10 minute drive), but I do most of my swimming in the morning before work at the YMCA (also a 10 minute drive).
– What are your main goals during triathlon season 2016 and mid/long term?

2016 – Get stronger in all three disciplines. In particular, I feel as if cycling is the one where I have the most room for improvement. In terms of a time goal, it’s hard to say because courses vary so much and weather can be a major factor. However, if all goes as planned I’d like to go sub 4:30 in one of my two 70.3 in 2016 (Ironman 70.3 Florida or Challenge St. Andrews).

Thank you Allan for letting us to know you better, 2016 is on and we support for a great season beginning in Ironman70.3 Florida (USA)