23 december 2015
Recap 2015 (June – July):
June and july, 2months that were very very loaded with races, AND with successes for our athletes!
Our Junior cyclists got podiumspots and were selected to ride international races. Our adult riders got several wins and podiumspots in road and timetrial races in Wallonia, Flanders, Holland and Germany. In Rund um Koln (Germany) we got 3rd after an exciting race.
Our triathletes WON half triathlons, sprinttriathlons and crosstriathlons in 5 different countries and got several top10 spots! With Ironvitoria there was a very nice full distance win with a 3h16-marathontime, which is hard in female racing!
2of our athletes got the chance to get a Hawaii-slot, one athlete chose for the Ironman World Championships Hawaii. The other chose to chase a nice result in the Ironman 70.3 World Championships in Austria.
It also meant the comeback of one of our athletes to competition. He directly managed a win in Germany!
In Ironman Frankfurt we had fantastic days, the hottest days ever measured in Frankfurt of all days! We had to drink more Erdinger beers than we are used to and eat more salty pretzels, to keep the body hydrated well!
But there was also the other side of success with 2 collarbone fractures…at such a moment, when the going gets tough…you know if u work with a real athlete or just a ‘wannabee shoulda coulda woulda athlete’ who has no stamina and can’t fight back from bad luck. Both of them fought back this year and both of them could step up to a podiumspot later that year!
Train Smart, Perform better
Jesse

No words needed I guess..

Was Sam Gydé hiding himself in Frankfurt? I don’t think so, working hard in perfect Hawai-weather!

These 3guys became an Ironman last weekend! Sem, PJ and Nesten smiling after the race!

Sébastien was racing hard in Chtriman and put down his best ever race, despite some technical problems on the bike! 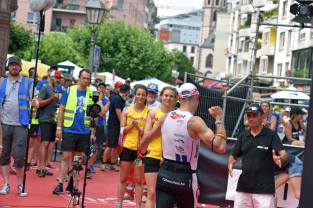 Hans crossing the finishline, he knew he was in for Hawai! Happy and well deserved! West-Vlaanderen has a top Ironman agegroup racer! 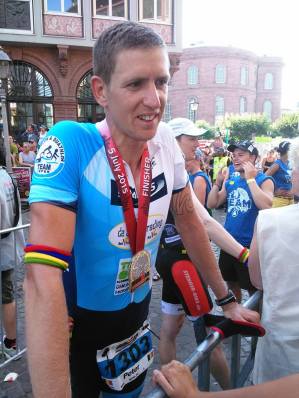 Peter looked good all the way! And did a very consistent race! 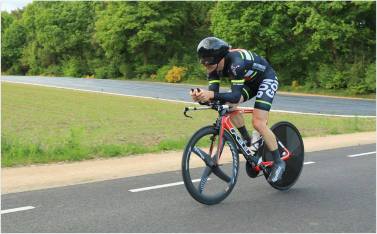